Hello and welcome to our small cosy solitaire games living room on the internet here at SolitaireJoy.com - My name is Lisa Davies. Since my second pregnancy in 2019, I have been absolutely obsessed with everything related to solitaire games. Therefore I decided to make this website.

The free card games here on SolitaireJoy are for all the people who just need a little 5-minute break sometimes. Come back to the site and play a few games of unblocked solitaire without ads taking over the screen. Here, many card games are played daily, and a lot of coffee is served to stay focused.

The users of SolitaireJoy.com love to play solitaire, and we finally have our very own classic solitaire games! The most popular card game is classic solitaire, also known as Klondike or Patience around the world. This card game was invented in the 1700s, and one of the reasons for solitaire becoming so popular is that you only need one person (yourself) to play the card game.

Another solitaire card game that is also very popular is Spider Solitaire, and it is super fun to play. Much of the knowledge I share here on SolitaireJoy.com is acquired via repeatedly failing until I learned the game, so I hope you appreciate it.

My solitaire adventure has been a long journey, but it has been worth it. To this day, I consider myself to be almost on par with the experts in the world of solitaire. If you want to read more advanced theories about solitaire, then don't worry. My plan is to release solitaire articles with the help of the most dedicated SolitaireJoy.com users like yourself!

Enjoy many games of Solitaire online

Whichever solitaire card games you play, it's a good idea to have a comfortable chair and a table within easy reach.

A pencil and paper should be set next to the solitaire layout for keeping score. Online solitaire can come with entertaining sound effects and realistic graphics that bring the card game to life as never before.

Solitaire is no longer an old fashioned game, as it has been brought into the 21 st century with the makeover. A game of solitaire will passively fill odd moments during your day, such as sitting in traffic on your way to work or waiting at the Doctor.

The game basically became popular in France in the 18th century. Different solitaire variations came into light when the popular game was developed by a Swiss mathematician named, Jean-Baptiste Pillement who was French and spent his working years in Paris.

After the invention of solitaire, it was modified and reinvented in many forms, like Spider Solitaire, FreeCell, Tripeaks Solitaire, and Pyramid. Initially, solitaire was invented just for entertainment.

Still, after being played over decades, it has become an integral part of training programs for memory improvement. This is because several versions are based on matching or recollecting cards which help in improving memory in the human brain.

While playing solitaire, it becomes a challenge to complete objective of the game in one go and thus gets addictive over time.

If you already know the rules of the solitaire card games (Klondike, Spider Solitaire, Patience), then you can play solitaire games directly here on the SolitaireJoy website and test your skills in the card games.

One deck of playing cards is used in standard solitaire, and there are 52 cards in total we use in a classic solitaire. Let's take a look at the individual card piles in solitaire card games which are called foundations.

When you don't have access to the internet and play on SolitaireJoy.com, smaller areas may accommodate all of your solitaire games. On the other hand, other game versions might need a larger playing surface and are often, therefore, played on the floor or on your bed.

They're usually roughly half the size of regular playing cards.

What is your objective in basic solitaire?

Your first goal in the original game is to release and place cards in a particular way to create each foundation, starting with the ace and working through the king in order and suit.

The ultimate aim of the game is to construct the whole pack on top of these solitaire foundations, and if you succeed in this task, the Solitaire game is won.

Guide to all the rules for Solitaire

In solitaire, the ranks of cards are as follows:

There are also four distinct sorts of piles in the game:

Here is an illustration that sums up the layout: 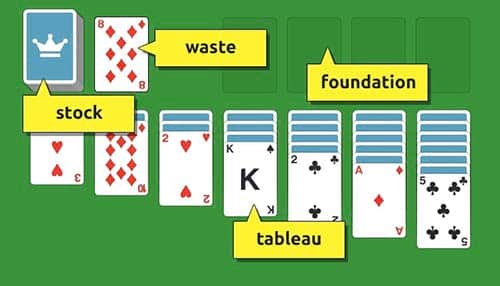 To construct the tableau, seven stacks must be established. Place the first card face up in the first pile from left to right, deal one card face down for each of the next six piles.

Deal one card face down on piles three through seven again from left to right. Continue this pattern until pile seven has one card facing up on top of a group of six cards facedown.

The remaining cards make up the stock (or "hand") pile and are placed over the tableau. The foundations and waste pile do not contain any cards at first.

HOW TO WIN IN SOLITAIRE

Same suit onto the foundations

If a nine is placed on top of a ten, you may begin building that stack in sequence by transferring the nine from one of the seven piles to on top of the ten. If you reveal an ace while moving cards from the tableau and constructing sequences, it should go in one of the beginning piles.

The foundations are built in sequence from ace to king, with suits going first. Continue transferring cards over each other in the tableau in sequence. If you can't move any more face-up cards, use the stock-pile to turn over the first card.

This card may be played in either the foundations or tableau. If you can't play this card in the tableau or foundation piles, move it to the waste pile and replace another from the stock pile. A "space" is formed when cards are removed from the tableau, which is vital in manipulating the tableau.

If space is formed, it can only be filled with a king. Filling a region with a king might potentially unblock one of the face down cards in another pile from the tableau.

The game continues until all of the cards are built-in suit sequences in the foundation piles. Continue transferring cards from the tableau to build up 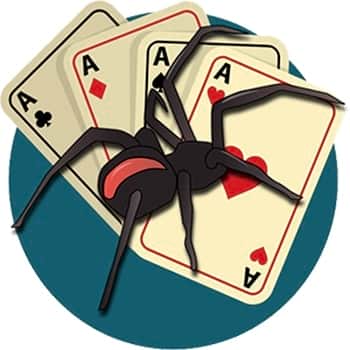 It's a great game to spend time on and relax to, plus it helps keep your brain focused and sharp. Solitaire on this page is true to the original Klondike Solitaire that everyone knows and loves.

✔️ Come back for even more games in a few days.

✔️ Spider and tripeaks solitaire ready in a few days.